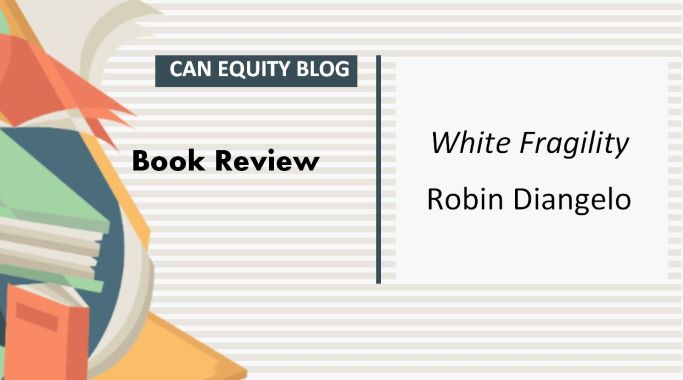 BOOK REVIEW: White Fragility:  Why it’s so Hard for White People to Talk About Racism by Robin Diangelo

This is the last review in a series of three reviews of books that address the issue of race equity. It is written by Robin Diangelo, a White author and academic who has served as a consultant and trainer on issues of racial and social justice for 20 years. In this book, Diangelo explores how white fragility develops, how it protects racial inequality, and what we can do to engage more effectively.

The reaction of White people when participating in conversations about racial equality (e.g., expressing anger/defensiveness and/or removing themselves from the discussion to avoid the discomfort and the issues that arise from it) was also mentioned in the previous books I reviewed (What Truth Sounds Like by Michael Eric Dyson and The New Jim Crow by Michelle Alexander). Thus, it seemed appropriate to delve into the social structures  and other factors that exist that lead to these reactions and that affect the dynamics of meaningful conversations about race. As alluded to earlier, Diangelo is a White woman who documents in this book the dynamic she has observed in her many years of facilitating conversations about equity, diversity and inclusion.

Race consciousness requires … that we be conscious about the complexities of race and the fact that most of us have not sufficiently developed our racial stamina (i.e., our stamina for having and remaining in difficult conversations about race). The struggle to eliminate racism is a long term endeavor. White Fragility helps us understand the complex dynamics that are at play when we have authentic conversations about race and provides tools for developing our racial stamina to help us navigate the difficult terrain.

WHAT DOES DIANGELO MEAN BY WHITE FRAGILITY?

Diangelo suggests that white fragility is a state where racial stress is introduced in a particular situation to a degree that causes White people to “display emotions such as anger, fear and guilt and behaviors such as argumentation, silence and leaving the stress-inducing situation. “

When white fragility surfaces, it disrupts the conversation (about racism or white privilege) and will likely cause a return to white racial equilibrium (i.e., an environment where White people feel comfortable). This dynamic must be honestly and appropriately confronted if the initial intent of improving racial consciousness is to be achieved. The discomfort felt in these kinds of situations creates an opportunity for mutual understanding and meaningful connection across races.

DIFFERENTIATING BETWEEN RACISM, PREJUDICE AND DISCRIMINATION

Diangelo helps to set a good foundation for conversations about race by defining the terms racism, prejudice and discrimination. These distinctions help us to recognize the attributes of racism and prejudice that pertain to us as individuals as well as those that pertain to the system of control that perpetuates racism.

Racism is a structure or system that is used for legal and institutional control. It is not an event or one time occurrence/action. The system provides advantages to Whites and marginalizes people of color.

Prejudice is something all humans have. It involves a prejudgment (attitudes, feelings thoughts, generalizations) projected onto an entire group of people.

Diangelo differentiates between the system of racism and individual racial prejudice or individual racial discrimination that people of all races can demonstrate. Racism as a system exists because the historical racial prejudices of Whites led to the accumulation of institutional power/authority and the subsequent and on-going use of that power/authority to institutionalize discriminatory behavior.

The idea of racism as a system is crucial. However, when we say that racism is a system that provides an advantage for Whites, then some Whites who are part of the conversation may perceive this as a personal attack. It is important to keep in mind that when we are talking about eliminating racism, we are talking about dismantling a system. While individual shifts in thinking/actions are necessary to dismantle the system, we must first acknowledge that this system of advantage/privilege is real. The first land mine that we might encounter in conversations about race is the tendency for participants to shift the conversation from the condemnation of the system to what is perceived as the condemnation of an individual participant.

One of the challenges we face when engaging in conversations about racism is with regard to the perception of what it means to be a racist. After the civil rights movement, racists were considered to be bad people: mean, ignorant, old, uneducated and from the South. Racist acts are viewed as “discrete, individual, intentional and malicious acts” as were on display in the video footage that documented the government’s response to civil rights advocacy efforts in the 1960’s. In this way of thinking, people who commit acts that are “discretely, individually, intentionally and maliciously” racist are bad (racist) and people who don’t act this way must be good (non-racist). Since I do not act in that way, then I am a good person, and I am not racist. If I don’t view myself as racist, there is no need for further discussion on this matter (i.e., I am not part of the problem. My learning is complete. My work on racism is done.).

If a person who thinks they are a good person (not a racist) feels that something they said or did was construed as racist, then such a person is likely to defend themselves by proclaiming in a variety of predictable ways (as outlined and challenged in detail by Diangelo) that they are not racist. The dynamic that emerges  takes the focus away from the need to dismantle the system of racism and shifts it to debating whether or not an individual has racial prejudice. Allowing our focus to be shifted in this way, protects the racial status quo.

RACIAL STRESS AND THE NEED FOR RACIAL STAMINA

We must admit and accept that racism is the norm and not an aberration. The fact that racial disparities are known to exist (and have existed for decades) and that most of us fail to do anything about it suggests either that: we feel that the groups that are disadvantaged must be responsible in some way (that it is the fault of the individual and not the racist system); or that we don’t feel the disparities are important enough to worry about much less to work on (and thus we are complicit in the injustice being perpetrated via the system of racism). Challenging the system does not come natural because it goes against how we have been socialized to behave. We must intentionally work to develop the skills to change these socialized behaviors so that we can engage in race equity work with the integrity and commitment that is required.

Diangelo introduces the concept of racial stress early in the book. She suggests that we must increase our racial stamina so that we can effectively manage our own white fragility or manage it in a group context when it emerges. This requires that we refuse the urge to retreat from the discomfort of authentic racial engagement. We must allow ourselves to feel racial stress and learn how to manage it in a way that allows for authentic racial engagement. Behaving in this way is what will allow us to build our racial stamina.

Being the educator and trainer that she is, Diangelo has filled her book with tools and strategies that we can utilize to  have authentic and meaningful conversations about race. In Ch. 9, she identifies common emotions, behaviors, claims and underlying assumptions of white fragility. This helps us to understand HOW  we shouldn’t act, WHY we shouldn’t act that way, but this begs the question: what is a person supposed to do?  That is where Ch. 12, Where Do We Go From Here, comes-in.  Diangelo suggests that we must change our racial paradigm. Our current paradigm, most likely, was not intentionally adopted by us but was developed based on our social and cultural up-bringing which is greatly influenced by racial identity. She outlines different ways of reacting and engaging with others when the emotions relating to white fragility emerge. If we view discussions about race as a way for us to grow as human beings, then we have a shot at developing the kinds of cross-racial relationships that are needed to tackle the system of racism itself.