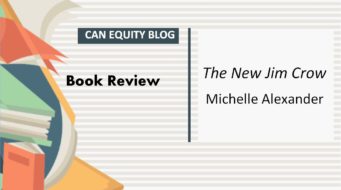 Book Review – The New Jim Crow: Mass Incarceration in the Age of Colorblindness by Michelle Alexander

In this series of reviews on books that address the issue of race equity, I will now turn to the seminal  work by Michelle Alexander, The New Jim Crow (2012, which is essential reading for anyone who doubts that institutional racism exists or who thinks that the problem can’t be as bad as the civil rights advocates suggest. What you will come to understand after reading this book is that the situation is far worse than you could have possibly imagined. Alexander describes in staggering detail the inner workings of the criminal justice system which she suggests serves as a system of social control that targets people of color, a system from which it is immensely difficult to break free once becoming entangled in it. The New Jim Crow gives us 100 reasons for which each and every one of us needs to be involved in dismantling the system of mass incarceration of Blacks and Hispanics that has been in place for the last 50 years. In this post, I highlight but a few of the alarming facts you can learn more about in The New Jim Crow.

WHY SHOULD WE CARE?

In the U.S., 1 in 3 young Black men will serve time in prison. In some cities, the proportion will be 1 in 2. These statistics have serious implications not just for the individuals involved but for Black Family and the Black Community in general.

This is one of the most stinging indictments by Alexander: “More Black adults are in jail, prison, probation or parole than were enslaved in 1850, a decade before the Civil War began.” (page 180)

HOW WAS THE SYSTEM OF MASS INCARCERATION CREATED?

Nixon’s War on Drugs and Reagan’s War on Drugs were some of the earliest manifestations. The “tough on crime” agenda of Clinton was also a devastating blow. In 1972, 350,000 people were incarcerated compared to 2 million people in 2012. The U.S. incarceration rate is the highest in the world. The U.S. incarceration rate is 6 to 10 times greater than it is in other countries. The crime rate has not risen in the same way (and is currently very low).

Drug offenses are the single most important cause of the explosion in incarceration. It is race bias in the drug war that has led to the disproportionate number of Blacks and Hispanics who are in prison. Alexander quotes a Human Rights Watch study from the year 2000 that reported that in 7 states, African Americans make-up 80 to 90% of drug offenders in prison.

NOTE 1: A 2016 policy brief by the Drug Policy Alliance showed that nearly 80% of people in federal prison and almost 60% of people in state prison for drug offense are Black or Hispanic. (http://www.drugpolicy.org/sites/default/files/drug-war-mass-incarceration-and-race_01_18_0.pdf )

NOTE 2: In recent years, the City of Austin and Travis County have been exploring alternatives for adjudicating low level drug offenses. We most certainly should applaud and support those efforts.

HOW DOES THE SYSTEM WORK?

Arrests: Drug operations target poor neighborhood that often have a high proportion of Black and Hispanic families. If only about 10% of Americans violate drug laws each year, then there is a lot of discretion for law enforcement in terms of who to target. Those resources have been brought to bear upon communities of color.

Local Police Departments are rewarded with funding and military equipment based on number of drug arrests (for supporting the War on Drugs). The Supreme Court has weakened constitutional protections for equal protections (i.e., it is o.k. to use race as a basis to stop and search someone as long as there was no evidence of conscious, discriminatory intent….which has allowed conscious and unconscious bias to flourish – refer to Chapter 5). Police Departments can seize assets of people accused (not just convicted) of drug crimes and can keep a percentage of the assets seized.

Judgments and Sentencing: If the person charged with a crime is indigent, they may not receive meaningful representation which may affect the outcome and/or sentence. Defendants may feel pressured to plead guilty to avoid long sentences, even if they did not commit the crime for which they were accused. Even when a case goes to trial, the Supreme Court has weakened standards for jury selection and the responsibility to ensure that racial minorities receive equal treatment under the law. All but the most egregious examples of racial bias in jury selection have been tolerated by the Supreme Court and lower federal courts.

NOTE 3: Many of these points (and others) are included in an April 2018 Report to the United Nations from The Sentencing Project. (https://www.sentencingproject.org/publications/un-report-on-racial-disparities/ )

HOW IS THIS EVEN POSSIBLE?

Alexander posits that when slavery and Jim Crow were abolished, that the laws had changed but that the sentiments and ideologies had not. A new form of social control was needed.  In the “New Jim Crow” system, the word “felon” has replaced the N-word. “In the era of colorblindness, it is no longer permissible to hate Blacks, but we can hate criminals. To be a Black man is to be thought of as a criminal.” (pg. 198-199)

So, what is the answer. Very simply, Alexander suggests, it is to end the war on drugs. There is no justification for the devastating impact this war is having on communities of color. We must do whatever it takes to eliminate racial profiling (which means we need more data and other tools for monitoring). Regarding post incarceration, we must eliminate discrimination against individuals leaving the criminal justice system. There is also no shortage of laws to be passed/rescinded, constitutional changes to be made and federal funding programs (that encourage drug arrests) to be eliminated to lessen the grip that the system of mass incarceration has on communities of color.

Alexander maintains in the conclusion of the book that while existing laws kept slavery and Jim Crow in place, it is indifference to racial injustice and suffering that keeps the new system of social control (i.e., the system of mass incarceration) in place. The injustice and the suffering is real but most everyone (except those directly affected) lives in denial or remain oblivious. How can this be if the evidence is all around us? We must re-boot our human capacity to show compassion and concern and to care for those who suffer at the hands of systemic inequities. So, we should NOT keep our heads buried in the sand. Alexander calls us to “see each other, learn from each other and respond to each other with love.” If we can remember that we do have the capacity and responsibility to “care for one another,” then the advocacy for change becomes a no-brainer for us all.