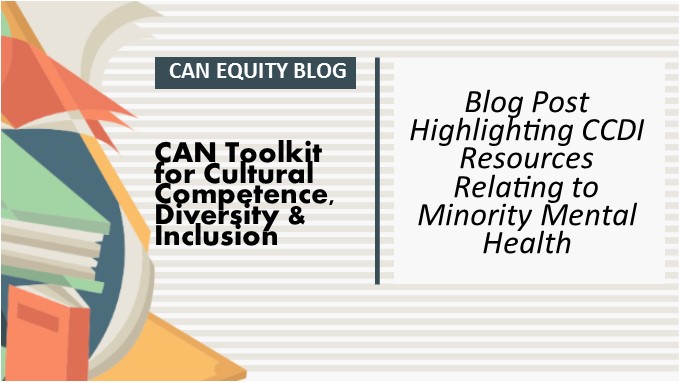 In 2008, July was designated as Minority Mental Health Awareness Month. Typically, when thinking about the word “minority” we think about race/ ethnicity, but this month is meant to include any marginalized or underserved community, such as people identifying as LGBTQ+. The CAN Dashboard looks at mental health as an indicator and when broken down by race and ethnicity, black adults and people with low income were more likely to report poor mental health.  There are also disparities when looking at mental health by income level. Of people experiencing poverty, we see that Blacks (19%) and Hispanics (21%) experience poverty more than Whites (8%) in Travis County putting them at a higher risk for experiencing psychological distress than Whites. As reported by Mental Health America and in other sources, minority groups are less likely to receive treatment than Whites, whether that be due to the stigma surrounding mental health in these communities or lack of access.

People in the LGBTQ+ community also experience higher risks for poor mental health. NAMI reported that LGBTQ+ adults are more than twice as likely to experience a mental health condition than heterosexuals, and LGBTQ+ people have a higher risk than the general population for suicidal thoughts and attempts. These risks are even higher for people who are both a racial/ethnic minority and also part of the LGBTQ+ Community.

CAN focuses its work around equity, diversity, and inclusion and wanted to develop a resource for individuals and organizations to better incorporate these traits into the services they provide to the community. The Cultural Competency, Diversity, and Inclusion (CCDI) Toolkit was developed in 2014 and updated in 2017 as a central site to find information that will build knowledge, increase understanding, and provide resources to improve services for different diverse groups. If you look under the tab “Resources for Specific Populations” there are sub tabs for “Black and African American Communities,” “Latino/A/X Communities,” “Asian American Communities” and “LGBTQIA”, all of which include links to resources and services for engaging with specific populations in a culturally competent manner.

To learn more about the CCDI Toolkit and access the resources listed in this blog, visit the following website: http://canatx.org/ccdi-toolkit/.