A Closer Look at Poverty in Travis County 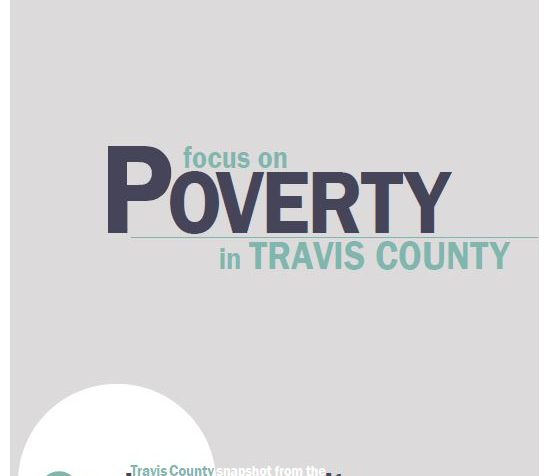 Travis County Research & Planning released an in-depth look at poverty in Travis County. The federal poverty threshold is about $12,000 in yearly income for a single individual and $24,250 for a family of four with two adults and two children. Since most social service agencies provide services to people at or below 200% of the federal poverty threshold, since research shows it takes at least that much to make ends meet in Austin, it is important to keep in mind that those living below the poverty level are thus living in extreme circumstances. According to this new analysis, more than 180,000 people in Travis County live in poverty – approximately 16% of the population.

The analysis by Travis County Research & Planning is based on American Community Survey 2011-2015 5-Year Estimates, which may differ slightly from the estimates on the CAN Community Dashboard based on American Community Survey 2015 1-Year Estimates. Because the 5-year estimates are the most reliable and provide the largest sample size, they allow researchers to explore characteristics of smaller populations with greater reliability, whereas the 1-Year Estimates provide the most current data available and a more nuanced look at trends over time. 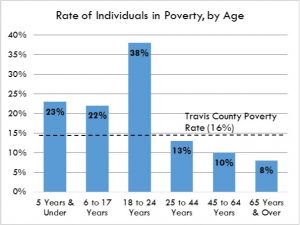 In terms of race and Hispanic origin, Travis County researchers found that poverty rates are highest for residents who are Hispanic or Latino (26%) and Black or African American (23%). After analyzing the population of people living in poverty, however, researchers found that Hispanics make up a majority (55%) of those living in poverty, while comprising only 34% of the general population. In comparison, non-Hispanic Whites comprise 50% of the total population but only 27% of those in poverty. 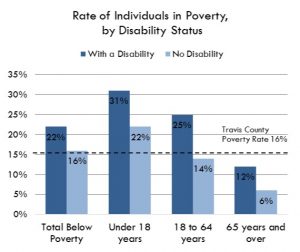 This Supplemental Report is an excellent guide to help shed light on the issue of Poverty in Travis County, as it shows how poverty is, more than anything, a family problem that affects Hispanic and Black families especially. Part of CAN’s efforts to better understand this issue include making child poverty and other related issues the focus of the CAN Community Council’s agenda for 2017. We encourage you to explore the presentations in our Community Council meeting archive to learn more about child poverty in Travis County.