We Are Safe, Just & Engaged

FOR ALL RACES AND ETHNICITES 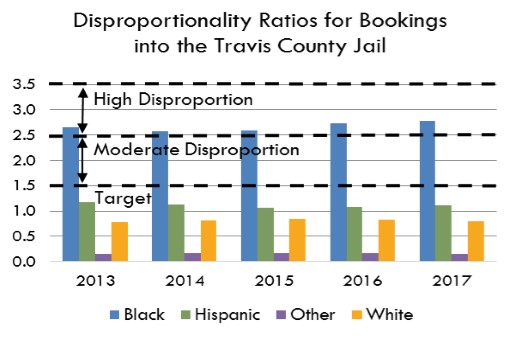 A FOCUS ON EQUITY

In 2013, Austin ISD changed its approach to discretionary removals, leading to a slight decline in the disproportionality ratio from 2.4 in the 2013-2014 school year to 2.2 in the most recent data.

The disproportionality ratio is calculated by dividing the representation of each racial and ethnic group removed from AISD classrooms to DAEP by their representation in the general student population. 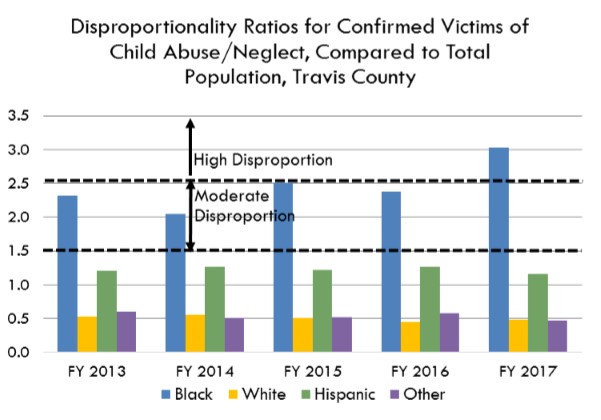 Black children in Travis County are more likely to experience child abuse or neglect than other groups. In Fiscal Year 2017, African-American children in Travis County made up about 23% of confirmed victims of child abuse or neglect, compared to about 8% of the total population under 18. This results in a disproportionality ratio of 3.0, indicating a high level of over-representation. 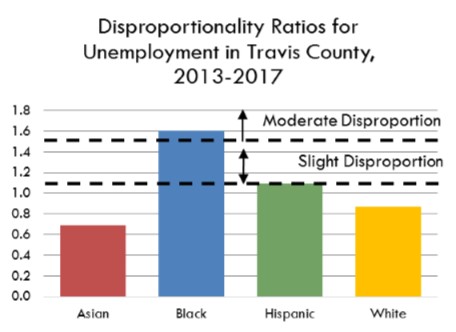 In 2017 Black Travis County residents had an unemployment disproportionality ratio of 1.6, which represents a moderate level of disproportion.

Hispanics are highly overrepresented among adults with no high school diploma. In 2017, people identifying as Hispanic or Latino accounted for about 71% of people with less than a high school diploma, but only about 29% of the total population over 25 years of age. This results in  a disproportionality ratio of 2.5, indicating high disproportion.

African-Americans are moderately overrepresented among adults who are high school graduates, but have not gone on to pursue post-secondary education. In 2017, people identifying as Black or African-American Alone made up about 15% of adults over 25 with a high school diploma (or equivalent), but about 8% of the total population aged 25 and over. This results in a disproportionality ratio of 1.9, indicating moderate disproportion. 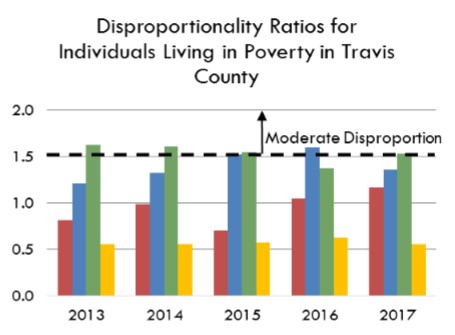 In 2017, there were lower number of Black and Hispanic residents living below Federal Poverty Thresholds, but poverty continues to impact Hispanic and Black residents more than Asian and White residents. 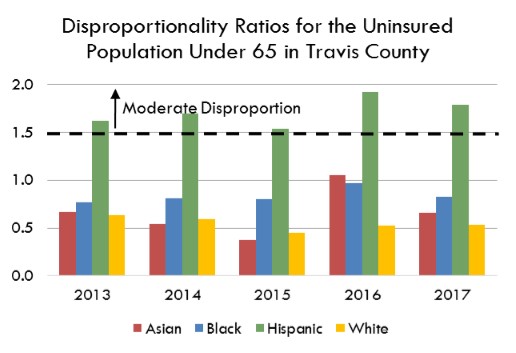 Approximately 10,000 more residents were insured in 2017 than 2016 in Travis County, thanks in large part to the Affordable Care Act (ACA). Despite gains, Hispanics are still less likely to have health insurance than other races or ethnicities. According to the Migration Policy Institute, an estimated 6.7% of the population in Travis County are undocumented immigrants, and 71% of those undocumented immigrants do not have health insurance. Overall, Hispanics are 3.4 times more likely than Whites to be uninsured in Travis County. In 2017, people identifying as Hispanic or Latino accounted for about 64% of people under 65 lacking health insurance, but only 36% of the total population under 65. This results in a disproportionality ratio of 1.6, indicating a moderate level of disproportion.