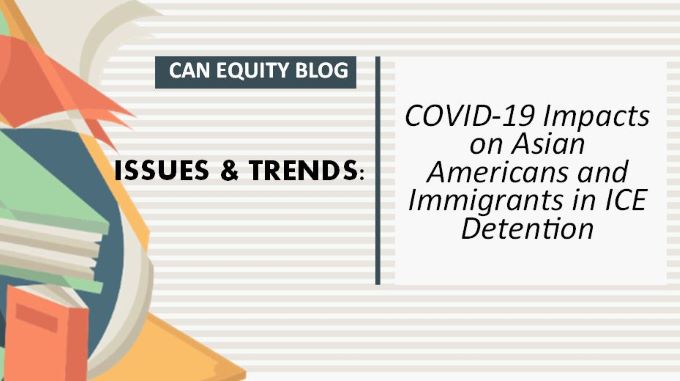 This is the second in a series of equity blogs on the distinct way that the COVID-19 pandemic has affected racial/ethnic minorities in the U.S. coupled with strategies that should be pursued to alleviate this disparate impact and treatment. The previous blog post focused on the unique challenges faced by African-Americans and Latinos. This post focuses on unique challenges confronted by Asian American and by members of immigrant communities, specifically those who find themselves in federal custody.

Since the outbreak of COVID-19, Asians and people of Asian descent have been the target of derogatory language and maltreatment. Some politicians, including the U.S. President, have used anti-Chinese rhetoric, implicitly (and sometimes explicitly) encouraging hate crimes, racism and xenophobia. A recent L.A. Times article (“Rise in hate incidents toward Asian Americans during coronavirus crisis, officials say” – May 13, 2020) touched on this subject. From February through April, the L.A. County Commission on Human Relations received more than 100 reports of hate incidents (i.e., hate motivated incidents that don’t rise to the level of hate crimes). Incidents reported in the article, included incidents where racial slurs were used against Asian Americans, threats of evictions of Asian Americans because of the fact that they were Asian Americans and a bomb threat against “a major Asian American institution.” In the first four months of 2020, the LAPD investigated 10 hate crimes compared to four investigations during the same period last year.

On May 12, Human Rights Watch called for governments around the world to adopt national action plans to counter intolerance in order to “strengthen the immunity of our societies against the virus of hate.” Asian Americans Advancing Justice has developed an initiative (https://www.standagainsthatred.org/) to document hate and to educate others  about the environment of hate around the country directed against Asian Americans. AAAJ is also a partner with Communities Against Hate, a diverse coalition coming together with other diverse communities to document hate and demand action through the web portal https://communitiesagainsthate.org/. At both sites, community members are able to submit details of incidents where they have witnessed or experienced hate. The resources tab at the Stand Against Hate Website, includes information about hate crimes laws, links to legal resources and a training for intervening as a bystander through a partnership with Hollaback, https://www.ihollaback.org/ .

In February, the Asian American Journalist Association (AAJA)issued guidance to media outlets about the need to be thoughtful about the manner in which they were presenting information about the COVID-19 pandemic “to ensure accurate and fair portrayals of Asians and Asian Americans and to avoid fueling xenophobia and racism that have already emerged since the outbreak.” They specifically called for the avoidance of: certain imagery of Asian countries and the Asian Community in the U.S. when reporting generally about the pandemic to avoid the association Asians as the cause of the virus; and certain terminology that would tie the virus to a specific geographic location in violation of the standards for naming illnesses that was adopted by the World Health Organizations. In March, the AAJA was joined by the Journalism and Women Symposium (JAWS), National Association of Black Journalists (NABJ), National Association of Hispanic Journalists (NAHJ), Native American Journalists Association (NAJA), and NLGJA: The Association of LGBTQ Journalists in denouncing “the escalating violence and rhetoric aimed at Asian Americans and Pacific Islanders, including journalists, amid the coronavirus outbreak.”

Assessing the Impact on Immigrants – Part 1

The impact of the current pandemic has brought in sharp relief the need for broad immigration reform. The impact on immigrant workers is very stark and will be covered in a future blog post. The first part of our focus on impact on immigrant to this country are those individuals who currently find themselves in ICE (Immigration and Customs Enforcement) detention.

The COVID-19 Resource Page of the Immigrant Legal Resource Center outlines how the immigrant community has been affected by the pandemic and shares policy recommendations directed at variety of government sectors that affect the lives of immigrants in this country. The preamble to the content shared in the resource page makes a strong case for why immigrants, particularly those who are undocumented, should receive special attention, care and support:

Urgent action is needed at the local, state, and federal levels to mitigate the reach of this pandemic virus. As with most aspects of everyday life, coronavirus impacts every area of our work including disrupting naturalization processes, highlighting the medical neglect in detention facilities, emphasizing the inherent dangers of ICE enforcement activities, exposing the public health concerns in jails and prisons, and demonstrating how immigrants are discouraged from accessing medically necessary treatment. Most disturbing, the administration has weaponized this global health crisis to further damage the immigration system and harm immigrants and their families by actions such as stopping all visa processing from abroad, including issuance of green cards; and closing down our borders and effectively prohibiting people from applying for asylum.

The ILRC along with the Immigrant Justice Network and United WE Dream have called for a suspension of all ICE (Immigration & Customs Enforcement Dept.) activities and protection/support for everyone regardless of immigration status. The ILRC also calls for state and local governments to “disentangle themselves from federal immigration enforcement” and stop cooperating with ICE.

Detention facilities, like jails, are designed to maximize control of the incarcerated population, not to minimize disease transmission or to efficiently deliver health care. This fact is compounded by often crowded and unsanitary conditions, poor ventilation, lack of adequate access to hygienic materials such as soap and water or hand sanitizers, poor nutrition, and failure to adhere to recognized standards for prevention, screening, and containment. For this reason, a variety of advocacy groups have called for the release of all people in ICE custody, particularly those who are most vulnerable to COVID-19 while their cases are pending —the elderly, pregnant women, people with serious mental illness, and those who have serious chronic medical conditions like heart disease, liver disease, diabetes, lung disease, and who are immunocompromised.

The New Yorker recently did a feature article (“The Trump Administration’s Deportation Policy is Spreading the Coronavirus” – May 13, 2020) on deportations and health outcomes for other individuals in ICE detention. It shared several examples of how the Trump administration’s lax attitude towards safeguarding the health and safety of detainees has created a dire situation not just in the detention facilities but also in counties receiving individuals being deported from the U.S.

This outcome for this one Central American country reflects a lack of precautionary actions to protect individuals in ICE custody and because of a lack of testing and monitoring. In mid-April, ICE reported a couple hundred positive cases of COVID-19. One month later, after testing nearly 1700 ICE detainees, approximately half tested positive. This is an alarming statistic since there are thousands of detainees in the facilities where these individuals were being held and who were exposed to the virus by the infected individuals. Clearly, better safeguards and accountability are needed.

The adverse impact that racial/ethnic minorities are experiencing because of COVID-19 are myriad as they are dramatic and disconcerting. We must not adopt the attitude that we’ll help to tackle these issues once the crisis is “over.” This crisis will be with us for a long while. Even if we don’t, individually, need help, let’s help those who need the help right now. But, when our lives go back to normal, we can’t stop helping others. We’ll need to keep fighting against hate and for building tolerance and ensuring that the root causes of the inequities that have emerged in the fight against COVID-19 are tackled once and for all.